This Thanksgiving ecard begins with a dog sleeping on his favorite carpet in the middle of the living room in front of an unlit fireplace and a stairwell at the left side of the screen. As the front doorbell rings, he opens one eye and his ear perks up. We get a closeup of the front door with a picture frame next to it staying “home sweet home”. The front door opens up and enters a large smiling turkey with a black pilgrim hat on its head tap dancing its way inside the house as few Fall leaves flying in as well. Right behind our turkey is a tap dancing bowl of string beans with stick legs and arms, followed by a tap dancing bowl of steaming mashed potatoes also with stick legs and arms, and then a tap dancing tray of stuffing followed by a tad dancing bowl of yams with marshmallows and close behind, a bowl of cranberry sauce also tap dancing its way through the front door. Last but not least, a gravy boat tap dancing its way in as well! One after the other, each bowl jumps up on a table joining our tap dancing turkey in the middle of the table decorated with a pumpkin, corn on the cob, a lit candle and autumn leaves garland. Each bowl settles on the beautiful table and as our turkey dances its way into the living room, we see it now all decorated with autumn leaves, the fireplace is lit and the room looks so warm. As our turkey tap dances off screen, each tap dancing bowl from the table are now following him in the living room settling around our cute and snoring little dog. The final appears with the words wishing you a happy and warm thanksgiving. 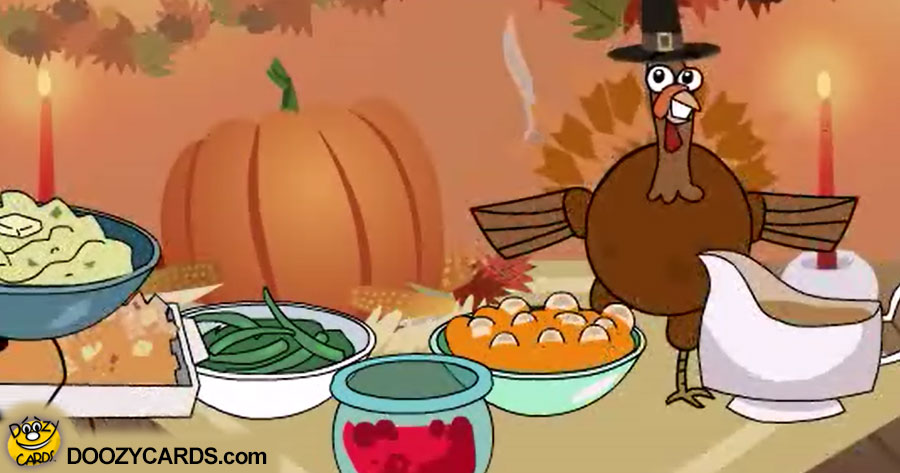