View the Ghost White & the 7 Trolls

The ecard begins with a large old book in the middle of the screen with the words Halloween Tales written on it. As the voice over begins, the book opens up and the pages turn a page with GHOST WHITE written on it. The page turns where it says once upon a tie and above is an image of Ghost White and the seven trolls. We then get a close up of the image where Ghost White and the 7 trolls are standing in the woods in front of their forest house. Ghost White has a light green body and large blank eyes, the trolls are all scary looking; Stinky, Slimey and Spikey are of green colors, Slimey day glow green, Sticky has thorns sticking out of his body and they all have scary faces and their teeth are sticking out. Igor is dressed with black cloak and hat, one is dressed like Freddy Krueger, and one as Jason from Friday the 13th and finally scary clown It holding a red balloon. Ghost White stands next to It and she opens her mouth wide and gobbles half of It and his balloon flies up in the air. We move to the next frame where we see the forest house surrounded by carved pumpkins with Ghost white at her half door opened and an old witch is giving her an apple. As the witch says trick of treat my dear, Ghost White gobbles up the witch and the poisoned apple flies off and on the ground. A blue bird lands next to the apple, pecks at it and dies next to it. Next frame, Ghost White is lying down in her glass coffin looking ghostly and her eyes wide open as always. A prince walks toward the coffin, the coffin glass cover is lifted and he gets closer to Ghost White. As he is bending forward to kiss her, Ghost White gobbles up his head and blood spurts out of the prince’s neck. Ghost White burps loudly. We then see the last page of the book with the last frame of Ghost White and the prince without a head and THE END written under the image. The book closes up and we are back at the book with Halloween Tales written on it. As the narrator laughs and the thunder breaks, the final banner appears saying have a spooky Halloween. 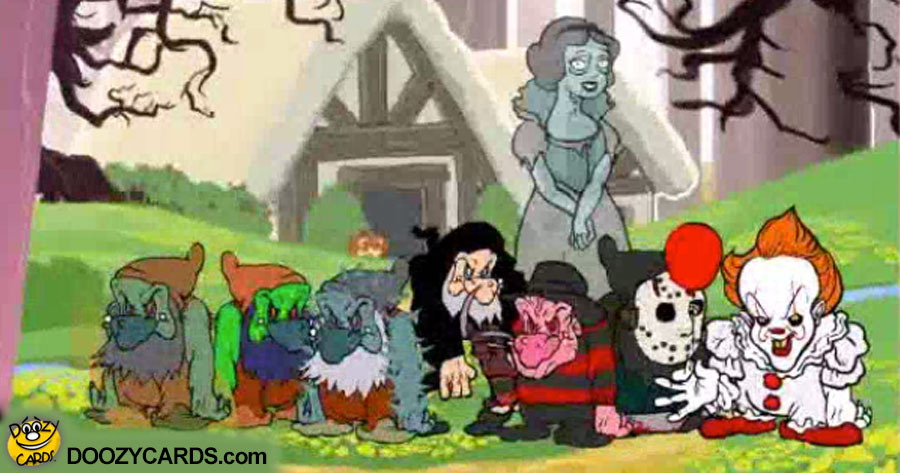