The ecard begins with a large pumpkin in a field and the moon brilliantly shining in the sky. A large knife comes out from the inside of the pumpkin, carving a large opening at the front of the pumpkin and the words A treat for you appears on the screen. The carved pumpkin opens up onto a stage. There are orange curtains with spider webs and a purple backdrop. A dog disguised as a ghost with the word boo! written on its front comes on the stage and another dog, a chihuahua dressed as a witch with a black cloak and pointy hat holding a pumpkin shaped bucket tap dances arrives on the stage but a long cane whisks him off stage as a Yorkshire terrier tap dances on stage dressed as a candy corn and makes his way to the front of the stage next to the dog ghost. The chihuahua witch tries again to steal the show by coming down upside down from the top of the stage laughing and giggling and is pulled back up off screen. In the back of the stage appears a large bulldog dressed as a carved pumpkin with the top of the pumpkin on his head. All three dogs dance together as the chihuahua witch flies on stage on a broom swing back and forth with a big smiling grin on his face but ends up falling off his broom and as he falls 3 pumpkin buckets filled with goodies fall into our dancing doggies onstage. Chihuahua witch appears once again and says happy halloween as the words have a happy halloween appear on the screen. Chihuahua witch disappears and our 3 doggies keep on dancing on the stage. 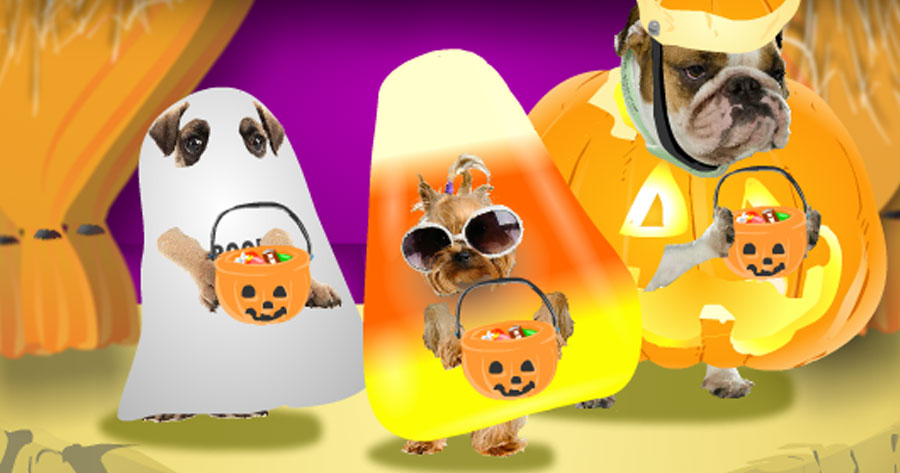