This Halloween ecard begins with a view of a dark winding road a hill panning up to a dark and scary castle all the way at the top of the road. There are dark clouds and lightning in the sky and the moon is piercing through them as bats fly around the castle. Next frame we see the inside of the haunted castle in a large room with a large window with frames, a long dark table with a 3 candle candelabra on it, a large candelabra hanging from the ceiling over the table and large melted unlit candles where a large bats flies toward and hangs itself down from it, a large white plaster fireplace with an antique metal armor holding a tall scythe. On the fireplace mantle are two gargoyles sitting on each end and a lit pumpkin between them. On the right of the frame, a metal box opens up and a Halloween female fairy flies out wearing a black leotard, striped black and orange leggings, pink bat wings and black hair and she holds a wand. She yawns as she flies out. The looks around and flies to the fireplace, waves her wand that sparkles and lights up the fireplace with a roaring fire. She waves her wand in front of the pumpkin and the pumpkin lights up brightly and stands still in a scary face. She waves her wand to the gargoyles who jump off the fireplace mantle and off they go. Next, close-up on our fairy who is in front of the 2 large paintings over the fireplace, Josephine with a large wig and 18th century period dress and a man with large black hat and 18th century period clothes. She waves her wand in front of each painting, the man grow two vampire teeth, his hat top grows taller and crooked like that of a witch, his eyes turn red and he is holding a pumpkin trick or treating bucket. The Josephine painting changes as Josephine’s white wig turns black with two long white streaks on each side of her head and she holds a cat as the whole background of the painting turns iridescent green. The cat in her lap suddenly jumps off the painting. We are back as seeing the whole room where our fairy waves her wand and the table fills up with 5 carved and lit pumpkins, filed punch bowl, two skulls lit with an orange light, a tray of bat shaped cookies and the 3 candelabra candles are lit. Candies appear in the large pumpkin at the center of the table. Over the table the large candelabra is also fully lit. Someone rings the bell at the castle door and our fairy waves her wand to the pumpkin with all the candies and she makes it fly to the soldier armor. He moans, takes the pumpkin with the candies and walks down the corridor that is lit with large lit candles. He opens the creaking door and we hear children say “trick or treat” and as he moans, we hear the children scream in fright which makes our fairy laugh and with a flick of her wand the final banner appears with the words Happy Halloween”. 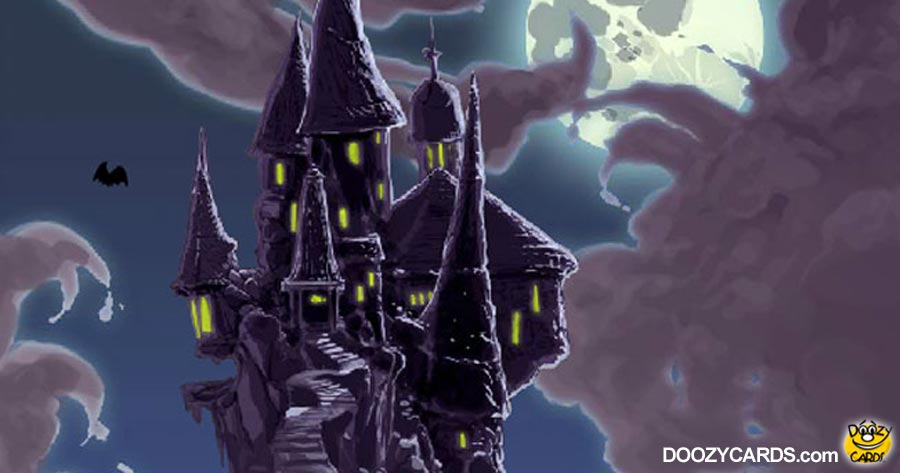