The card begins with a big sign saying Jurassic Turk on it and behind the words is a turkey dinosaur. The following words appear under the sign “65 million years in the cooking”. Cut to a scene in a large kitchen with a scientist chopping vegetables. He has dark hair, dark sunglasses, a dark grey short sleeve shirt and a chain around his neck. A turkey with teeth jumps on the scene and screams gobble gobble startling the scientist who screams and runs out of the kitchen closely followed by 2 more turkeys. Next, we see our scientist sitting in a red jeep as rain is pouring down. He tries to start the vehicle to no avail and he screams as another turkey with teeth appears screaming gobble gobble and fanning its feathers to scare our man even more. Next we see full shot of the red jeep in the dark and rain keeps pouring down. The jeep moves up and down as it sounds and looks like our scientist is being attacked my the turkey with teeth. This scene morphs into seeing a huge dinosaur turkey running after the scientist in his jeep. They get closer to a huge fence where the keep with our scientist crosses the fence but! electrocutes the dinosaur turkey making it look like a skeleton as it gets fried on the fence. The final frame shows is a huge cooked turkey on a platter and next to it, our scientist, looking very small next to the turkey, is sitting at a table holding his knife and fork ready to eat! The final banner says dinner finds a way. 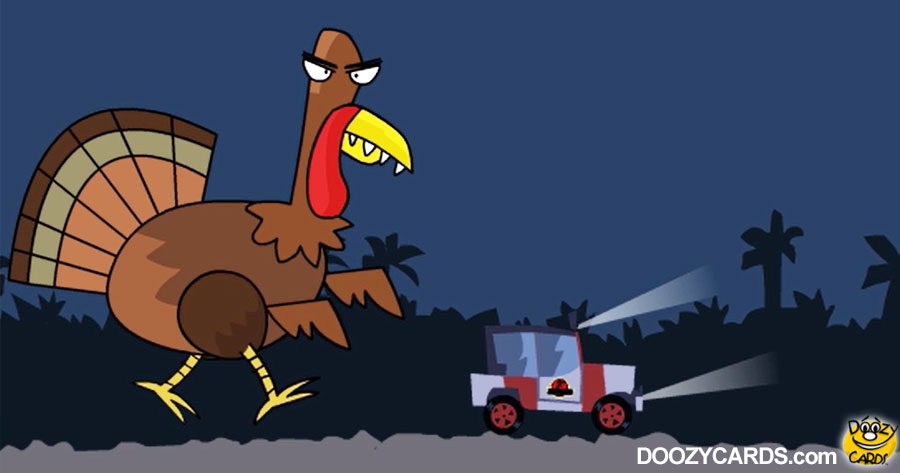