The card begins with a cute female penguin with a pink bow on her head sitting on the top of a small iceberg looking bored. The next frame appears with a swirling figure coming from under the ice and it is our Funky penguin, wearing a large brimmed black hat and gold sunglasses holding a microphone. As he begins to sing, the iceberg background moves to the left to uncover Funky penguin’s band; one penguin with a large wavy black hat and round gold glasses, a penguin drummer with a large brim brown hat playing the drum kit in front of him and the word “Shy” is written on bass drum and on each side of the drum are 2 big polar bears each standing on an ice mound and dancing to the music. As he sings, Funky penguin is dancing left to right and swirls around again. He moves to the next frame singing away and in the background, two smaller penguins are walking in and towards the cute female penguin holding a large yellow cake with lit blue candles. Funky penguin dances back in front of his band and polar bear dancers, he dances and swirling and we get a close-up of Funky penguin closer to his band as he sings “have a funky birthday” and keeps dazzling us with his dancing. Next frame, we see one of the polar bears giving birthday flowers to the cute female penguin who eats them, and next the other polar bear brings the cake to her with a big smile and she delightfully blows the candles and she keeps on smiling. We go back to Funky penguin singing and dancing and at the last line, we see Funky penguin, birthday female penguin, the band and polar bears sitting on the snow eating cake. We then see a final banner saying “Happy Birthday” in yellow letters and sparkling stars shining all over and around the words. 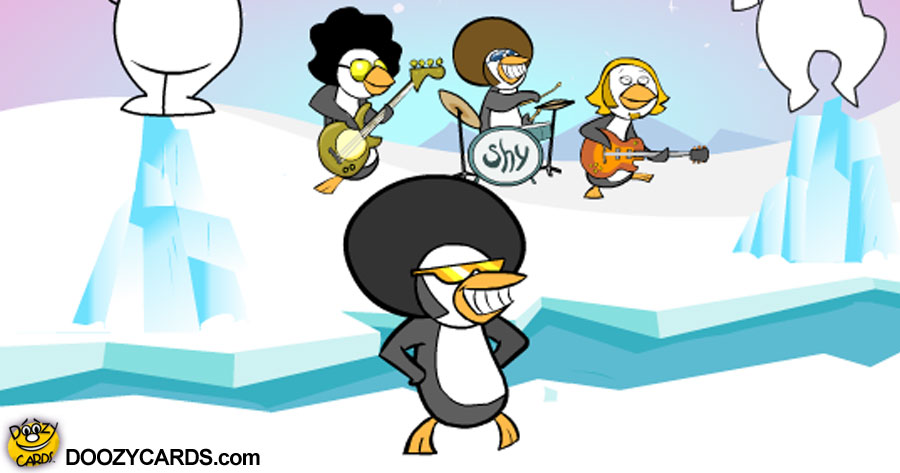