Between the gently swaying leafy branches of a weeping willow with snow on its leaves, fly 2 beautiful cardinals, one red and the other one dark pink red, fly between the dancing branches. The cardinals land on a trellis filled with snow. On each side there are snow covered cone shaped bushes on each side, a high fountain with a Cupid holding a bow and arrow covered with snow, a bird house on its right side, 2 rounded top bushes and a bush fence in the background. We get a close up on the 2 cardinals who begin to sing to one another and as they do, the snow around them melts and as they fly out, a red rosebud appears and opens up in a beautiful red rose with green leaves. The two cardinal fly in front of the rose, the back up and around the trellis to finally land on branches on the trellis and they face one another and begin singing to each other and more snow melts and as they fly out, 5 beautiful roses blossom. One after the other they fly to the right then left of the screen as we get a close up of the top of the bare trellis. Again the two cardinals land on branches facing one another, they sing very close to one another and then, they kiss as they each lift one of their wings and hug one another and the snow melts and water drips around them from the trellis. All the while, roses blossom with green leaves around them forming the shape of a heart around both cardinals. We pan out getting to see the whole scene and another larger heart shaped flower garland surrounds both the cardinals and the first rose heart and the whole trellis is filled with beautiful roses with green leaves. All the snow falls off from the bushes, the fountain, the bird house and trees around the trellis have pink and white flowers that have blossomed all over them, water begins to flow from the fountain and at the bottom the words “May Valentine’s Day warm your Heart” appears while sweet weeping willow branches sway at the top of the lovely scene. 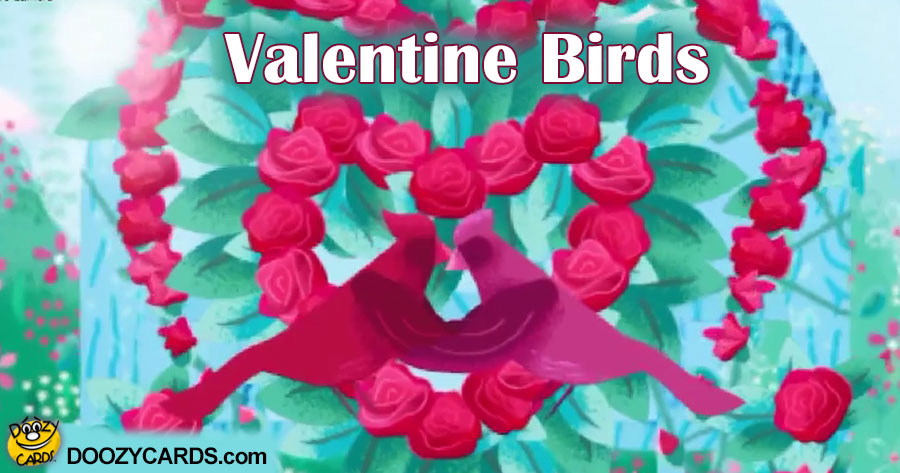