This animated Christmas ecard begins in black and white with an old tv 1950’s style with a Santa Claus doll standing on a white snowy cover that sits on the old tv. Next to it is a silver Christmas tree with ornaments. As the tv show begins, we get a closeup of the screen and the words The Johnny Cache Christmas Special appear on the screen. Johnny Cache appears on the screen, sitting on a stool holding his guitar and large snowflake cutouts hang in the background as well as a large Christmas tree cutout. Johnny Cache sings his song, and as he sings, we get a closeup of him and everything in the scene becomes colored! Johnny wearing his black jeans and jean jacket, the background snowflakes are yellow, green, purple and blue and the Christmas tree cutout is purple as is the star hanging above it, the complete scene on a green floor. Johnny Cache gets up and walks on the stage where we see appearing a large snowman with 3 white chickens dressed with Christmas hat, white pearls around their neck and pink low heel shoes are making finishing touches to the snowman. Next, a red and golden sleigh appears on the scene with 2 smiling reindeers with several colored Christmas balls on their antlers and colorful Christmas presents in the sleigh and next to it. The reindeers move on and we get a closeup of Johnny singing and playing his guitar and walking from scene to scene in different background hues to finally arrive to Santa Claus with a huge white beard sitting on his throne and the white chicken ladies are lined up to see him and give him their wishlist! On a sparkling background and then back to the original living room with the old tv and silver Christmas tree now all colored, Johnny finishes his song and on the tv appears the words Merry Christmas to you with a photo of Johnny. 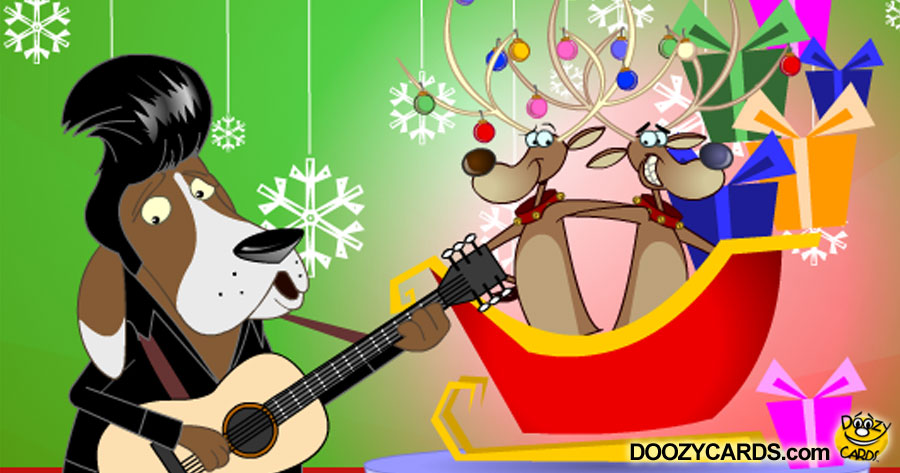