The first image of this ecard is a 3 tiered yellow frosted cake with candles is at the right of the screen on a table and next to it is a pitcher of margarita and two glasses filled with margarita and each has a slice of lime on their brim and two brown napkins are next to each glass. At the of the screen and next to the table are a red, yellow, blue, pink and orange striped donkey piñata and pale blue and orange balloons hanging in the air and on the right side of the screen are 3 balloons floating, one light green, one light blue and one light orange. The following words appear: “Would you like to hear a beautiful birthday song?” Next, a chihuahua, two cats, a bulldog and a French bulldog dressed as Marichis (black jacket with decorations on their arms, black sombreros, white shirt and red neck tie) appear on the table next to the cake and drinks. They each hold an instruments, one cat plays the trumpet, the bulldog a guitar, the second cat a violin and the French bulldog a guitar ron or large Mexican guitar and our main singer, the chihuahua. is holding a margarita in his right paw. As the sing, they move side to side. Suddenly, the Chihuahua main singer hiccups making his sombrero go up and down on his head. The chihuahua being quite drunk falls over to the side and disappears from the screen, the music stops and starts again. The final banner with yellow letters with a red outline appears and says “Wishing you a fiesta-filled 40th birthday” and the “40th” is very large on the screen. 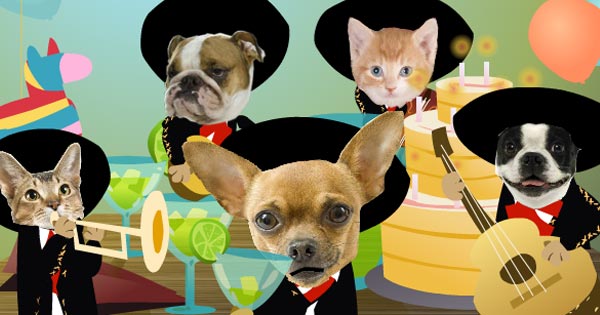